Polytechnic University of the Philippines 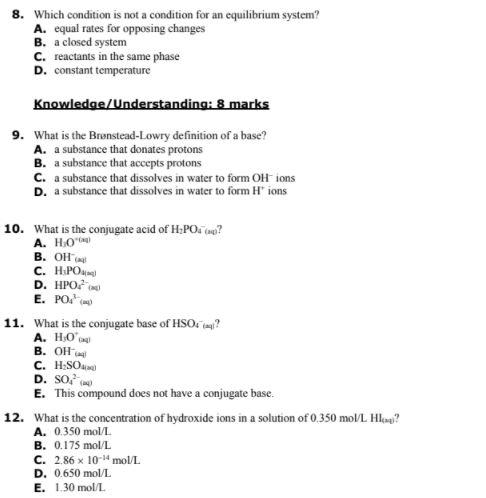 ALSO [4]: How would you identify these ions in aqueous solution by selective precipitation?

You can get the concentrations (in M) for each substance by dividing the moles of an individual substance by the vessel volume.

During moderate activity, an endurance athlete mobilizes 40 grams of liver glycogen as free glucose in a two-hour period. Assume the entirety of this liberated glucose was used in the production of ATP via aerobic metabolism, yielding 32 ATP per glucose. Given the molar mass of glucose is 180g/mol, how many moles. To the nearest tenth of a mole, of ATP were synthesized from this mobilized liver glycogen? Please show your work and step by step

Calculate the Q-values for the electron-capture, beta+, and beta- decays of 64Cu.

13. A solution contains 3.25 x hydroxide ions. What is the pH of the solution?

E. none of the above

E. All acids are the same strength, as long as they have a dissociable hydrogen ion.

15. The equilibrium system shown below was analyzed and the concentrations of    and were found, in mol/L, to be 4.4, 3.2, 1.5 respectively. The equilibrium constant must be which of the following?

17. A full syringe contains this equilibrium

If nitrogen dioxide gas is brown and the other gas is colourless, what is observed when the syringe is used to compress this gas mixture?

A. the mixture gets darker

B. the mixture gets lighter

C. no change in colour of the mixture

D. the mixture is colourless

If some nitrogen gas were injected into this system at constant temperature and pressure the system would most likely experience which of the following?

A. an increase in (hydrogen)

B. a decrease in (ammonial)

C. a decrease in (hydrogen)

D. an increase in (ammonia)

19. Consider the following system at equilibrium

Which of the following actions would cause the   to increase?

2) Complete the spectroscopy data tables for a compound with molecular formula . Determine the structure of the compound. Any labile protons, if they exist, will not be present in the 'H NMR spectrum. Look carefully at the integration values!